Atole made from the treasured cacao bean was reserved only for the noblemen of Moctezuma´s court, who drank it from special gold ceremonial cups. The women were served their atole flavored with chia and a topping of chile.

A typical mole without chocolate, but the light red sauce still has the blended seasonings of both the Spanish and Indian cultures. This recipe by Zocorrito Zorrilla is usually served with white rice and tortillas.

One of the seven famous moles of Oaxaca, mole amarillo was originally made with the local chile amarillo, which gave it the yellow color of its name. This version by Socorrito Zorrilla uses the more easily obtained chile guajillo and chile ancho, which will produce a reddish dish. It differs from most of the other moles in that it is really more of a vegetable stew with small masa dumplings.

In the language of the Aztecs, the combined words for "avocado" and "mixture" translate into guacamole - a wonderful concoction that is perfect served with tacos of botanas (before-meal snacks). In Mexico, guacamole is still made with the traditional molcajete and tejolote (mortar and pestle) or with a fork and bowl.

Inspired by the Spanish puchero (stew), this one-dish meal has its roots in the early days of the vice-royalty in Mexico City. It makes a hearty supper dish preceded by quesadillas. Serve with hot tortillas, finely chopped onion and lime quarters.

Eaten everywhere in Mexico, this simple, nourishing soup is often served as a main course. The vegetables may vary, but it is almost always served with lime, chopped onions and green chiles. Chicken stock is a major ingredient in may recipes, so it is wise to make it in advance and freeze it.

If just one soup could be labeled the classic Mexican soup, it would probably be this one, combining as it does the traditional flavors and textures of the country´s chile, tomato, avocado, epazote and tortilla.

Tamales have been fiesta food since pre-Hispanic times, when they were considered a gift from the gods during the twelfth month of the Maya eighteen-month calendar year. Because this time coincided with the Spanish conquerors' celebration of All Saints Day, ...

This makes a festive buffet dish served with "calabacitas picadas" and "ensalada rosaura". Any leftover pork is ideal as a meat filling for Mexican sandwiches.

This recipe from María Dolores Torres Yzábal is based on the traditional bacalao a la viscaína, Basque-style salt cod from the north of Spain. The original uses dried sweet red peppers and is considered one of the supreme dishes of that region and is very often served at Christmas in some Mexican homes. When preparing this dish, remember that reheated codfish is even better that freshly prepared.

DAY OF THE DEAD BREAD

During the weeks around the Day of the Dead (All Saints and All Souls), celebrated on November 1 and 2, this traditional round loaf is baked and decorated with pieces of dough formed into tears or bones. It is one the many foods placed in the colorful offering for the dead, along with chocolate and vivid yellow marigolds. 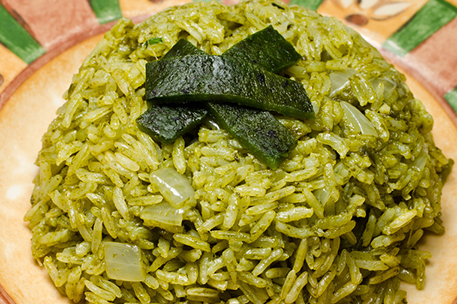 Rice is served often in Mexican homes. It ranges from plain white rice to more elaborate dishes like this one that can be a meal in itself. The area around Morelos in central Mexico produces a rice that is favoured by good cooks, since it has a large, fat grain that gives an excellent result in casseroles. Processed, quick-cooking brands should never be used in Mexican cooking.

This dish, resplendent with the red, white and green colors of the Mexican flag, was created by the imaginative Augustine nuns of Puebla for a visit by Mexico´s very own emperor, Don Augustín de Iturbide, who, after the War of Independence, lasted a mere eleven months in office. It is featured as a main.
Dish during August and September, when the new crop of walnuts is available. Although this dish appears complicated, the sauce and filling are best prepared the day before, and the chiles can be stuffed several hours in advance.

Pasta arrived in Mexico during the thirty years of Porfirio Diaz's presidency, with its emphasis on grand continental cuisine. This recipe calls for fideos, or vermicelli, but almost any soup pasta can be used, even stars, wheels or alphabet types. The trick is to have the noodle acquire the proper light-brown color without getting too dark and bitter tasting.

Vegetable fritters are a popular way of preparing vegetables in Mexico, particularly during Lent. They also accompany simple chicken and fish dishes such as huachinango a la talla. These potato patties can be served with a fesh salsa mexicana or a cooked salsa.

In some parts of Sonora, potato chunks are added to this typical regional soup. If queso Chihuahua is not available, use Monterey Jack or a medium-sharp Cheddar.

A typical dish for “almuerzo” (a late breakfast), “enfrijoladas” can be livened up by serving pickled jalapeños on the side. While the type and color of the bean that is used varies from region to region, it is the ebony-hued frijol negro (black bean) that is most typical of this dish.

When a dish is referred to as a la mexicana, it is made with tomatoes, onions and chiles, combined here with the plentiful shrimp from the coastal waters of Mexico. 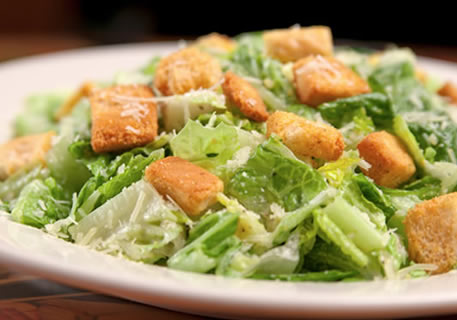 Caesar salad has had a following ever since the late 1920s, when it was created by two Italian brothers, Alex and Caesar Cardini, in their Tijuana restaurant. It is now featured in many restaurants worldwide, although few versions bear a close resemblance to the original.

This casserole of meat, tortillas and tomates verdes is very popular among Americans living in Mexico City and is excellent with "ensalada mixta con aderezo de aguacate".

This special meat loaf was presented at a culinary festival of Mexican cooking in 1975. On slicing, the red and green strips of chile make a colorful presentation.